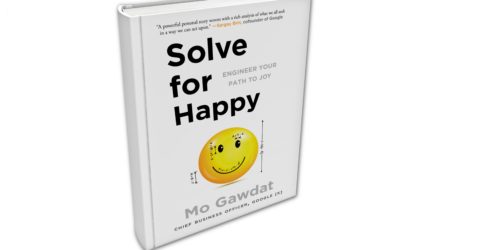 REVIEW OF ‘SOLVE FOR HAPPY, BY MO GAWDAT

I’m a self-confessed lover of all things ‘self-help’ so this book immediately caught my attention. I buy audio books the way some women buy handbags and shoes, so suffice to say I have listened to hundreds of books in the personal development genre. Some have been good, some mediocre and some excellent. Very few fall into the ‘life-changing’ category but this book is one of them.

Mo Gawdat is a successful business man who loves to find scientific solutions. While living the successful life with all the trappings of that success, Mo experienced a growing realisation that he wasn’t really happy and he set about finding why success and wealth didn’t equal happiness. The seeds of this book were planted. What Mo didn’t know then was that he would need his formula for happiness more than he could imagine. During a routine operation, Mo’s cherished son, Ali, suffered a medical mistake and lost his life. I listened to the audio book of Solve for Happy which Mo narrated himself, and listening to Mo’s voice break as he talks of those dark moments when he lost his son was heartbreaking. As he says himself, in that dark time, he had every excuse to wallow in unhappiness, but he pushed himself to follow his own formula and it gave him the strength to accept what had happened without sinking into despair.

Mo believes that happiness is our default state and we allow illusions of how life should be to blur our vision. His analytical equations for remaining positive and happy include rising above the incessant negative chatter of our minds, being aware of the brain’s blind spots and hanging on to the ultimate truths in order to live with joy and peace. He refers to the constant chatter in our head as a duck, then encourages us to “Shut the duck up!”.  He also spells out how to challenge your assumptions, your past beliefs, your beliefs about the future and your emotional attachments, as well as urging us to live our lives in the present moment. He eloquently explains: “Live your life in the here and now, not inside your head”, basically meaning that we all tend to be thinking about either what has happened in the past or what is going to happen in the future; very few of us stay focused on the present moment with the gratitude for what we have right now.

Mo also encourages us to look down, not up. By this, he means that we tend to spend our lives looking up at the people above us who have more money, bigger houses, faster cars; but rarely do we look down to the people who have far less than we have and realise that they make up a considerable proportion of the population. This makes us very lucky. It’s almost cliche to say that there are always people worse off than yourself, but the way Mo states it actually resonates more deeply. But then much of this book does resonate deeply despite the fact that, quite honestly, most of us know the truths of which Mo speaks. One of the best lines for me is this: “Real knowledge is to know the extent of one’s ignorance”.

The reference Mo makes to video games and his son finding a ‘cheat’ to another level had me in tears. He said that when they played the games together, Ali would always know the cheats that took you directly to the next level, but he would wait there for his father to catch up. This was the analogy he used to describe his son’s departure. His assertion that his son is merely waiting at the next level for Mo to catch him up is just so beautifully described that it is impossible not to really, really hope that it is true.

Towards the end of the book, Mo takes a risk and discusses whether the universe is a result of randomness or intelligent design. Obviously this could be quite divisive. Mo comes down firmly in the ‘intelligent design created the universe’ camp, but he makes it clear that this is his belief and he makes a strong case. You can agree or disagree but you can’t deny the strength of the argument.

This book is definitely a life-changer. I will remember Mo’s son for a long time even though I never met him, or even heard of him before I read the book. Mo would be happy that his beloved son would be having such an impact on people from his ‘next level’ where he is waiting peacefully. Mo has said that his mission is to make 10 million people happy; well I’m happy to say that I am definitely one of them.

Solve for Happy: Engineer Your Path to Joy